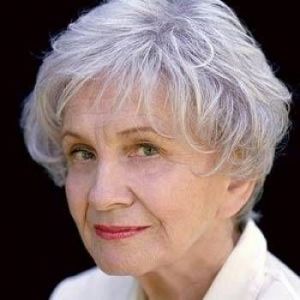 I cannot help but gloat and crow on Mz Monro’s behalf. Alice Monro was one of my teachers at Banff School of Fine Arts, and I was struck by her humble attitude, astute, owlish powers of observation, and kindness.

I have been reading her work since I was seventeen, and I believe she is the greatest living short story writer. Her piece “The Bear Came Over the Mountain” about a man caring for his wife who develops alzheimers, was made into a movie. The story is so poignant, I had to read it three times. I never have fully understood the title which is apparently derived from a children’s song of the same name. A philandering former professor finds the tables turned when his wife develops an intimate relationship with a man in the nursing home she has been put into. In an ultimate act of self sacrifice, and probably the character’s sole unselfish act, the husband realizes he could develop a relationship with his nemesis’s wife, in order to enable his own wife to spend time with the man she loves. It’s heart breaking.

Alice Monro makes writing look easy: It isn’t. She shows us the intricate mechanisms of people’s decisions, for better or worse, the social forces that sometimes prevail and influence those decisions, the nasty background of interfering neighbours and unsupportive community members, and how the human spirit can prevail despite of, or perhaps because of these elements.

ALICE I LOVE YOU!!! NO ONE DESERVES THIS AWARD MORE THAN YOU!