Home > Posts > Catalan: The resurgence and necessity of dialects

Catalan: The resurgence and necessity of dialects 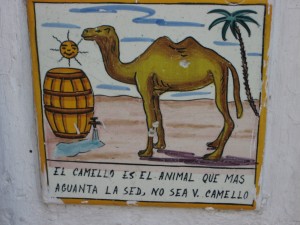 CATALAN is a dialect spoken in the north of Spain. I found it hard to understand and I speak Spanish. I found a bar (of course- it’s Spain) with great tapas and amazing signs in Sitges, a favorite haunt of Dali. This sign says in Catalan: The camel is an animal which can tolerate thirst the most. Don’t be a camel!

Many countries are recognizing the importance of cultural and linguistic diversity. In Canada, some native languages are experiencing a revival which is critical to native culture, nearly extinguished a hundred years ago by oppressive forces including the Canadian government. One of my former professors, Dr. Hess, transcribed Salish so that the language could be spoken again in Washington and British Columbia. Regional dialects are common and we usually recognize the slight changes in accent. Well- have yourself a drink. It’s the weekend, so don’t be a camel!