I love studying Italian. I see so many interesting connections in the words.

English of course originated in Latin and Greek, dilly dallied through French, which was the language of the elite , and then moved through the Anglo Saxon roots. This is why English is sometimes called a bastard language- really not quite nice. Let’s say it’s rich.

I keep finding interesting connections as I learn Italian. I was wondering about the word angry , arrabiata/ arrabiato and its possible connection to rabies- Look at the root.

Another fun one goes back to the intellect.

For example, the Latin root Cap/Caput means head, and in Italian, il capo is the head, the boss, the leader.

Other phrases are also related to being in charge or being the boss. Pienso io, or I think is really used to mean “I’ll deal with it” or “I’ll take care of it or be in charge.” Pienso of course is related to the thinking in the head, even though it’s a separate phrase and origin from Capo.Pienso/ penser are Spanish and French cognates.

Looking at origins…. We can certainly see the cognates in the Romance languages. In Greek , the personal pronoun for I is eime, in Italian, io, in Spanish yo, and in French, Je…. I wonder about Je and what linguistic phenomenon occurred to make the Y sound change to a J sound …but nonetheless, we can see the relationship between all of them- except when the pronoun trickles down to English with ” I .”

There are also some great adjectives in Italian. I love STANKO/ STANKA for tired, exhausted, wasted….

and SPAVENTOSO/SPAVENTOSA  for shocked,  upset and SORPRESO is for surprise.

Of course some of our most modern words like VIDEO are straight from the Latin word to see- Video, vidate, vidatum… showing how word meanings transform to keep up with the times. Another modern word from Latin is TRANSPORTATION, which comes from trans- across- portare, to carry, and the -tion noun suffix. It most likely evoked slaves carrying a big fat Roman on a canopy with four tiers. I love the thought of this image changing into planes, trains, subways, buses, cars and best of all, bicycles. 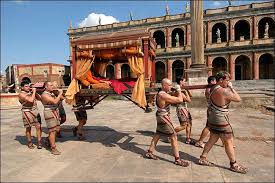 One can easily see how these words evolved into English, or devolved, depending on one’s perspective. Italian is a highly textured language, and the ST and SP blends are used a lot. One can see how rich the language is. It’s no wonder it has not eroded as English has into a sloppy sounding mess. Italians take pride in their gorgeous language- and so they should!

Peel me a grape!